The digital pen is the tool that, together with the dot patterned paper, enables you to store and transmit basically anything you write or draw to anywhere in the world. 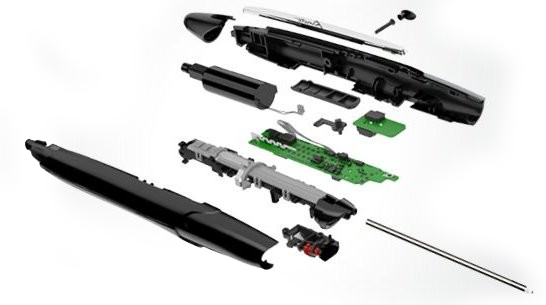 The main parts of the digital pen are a digital camera, an advanced image-processing unit and a Bluetooth radio transceiver. It also contains an ink cartridge so that you can actually see what you have written or drawn.

The digital pen does not have any buttons or display. It looks and feels like an ordinary ballpoint pen and you use it in the same way. You activate the pen by simply removing the cap and deactivate it by replacing the cap again. It couldn’t be easier.

The dots of pattern are illuminated by infra-red light, making them visible for the digital camera. Digital snapshots, at a rate of 100 per second, are taken of the pattern. (The ink from the pen is not visible to the camera. Therefore the pattern is not degraded by your writing.)

The image processor calculates, in real-time, the exact position in the entire Anoto proprietary pattern. During image processing, snapshots are compared and information about how the pen is held is also gathered and stored.

All the data from the image processor is packaged and loaded into the pen memory, which can store several fully written pages.

The information is transmitted by the Bluetooth transceiver, either directly to your computer, or forwarded via a relay device (e.g. mobile phone, personal computer or handheld device) to the Magicomm’s Mercury Service. From here all information will be forwarded for further processing elsewhere.

The pen holds an ordinary ink cartridge to make visible all that you have written or drawn. A force-sensing resistor measures the stylus tip force. 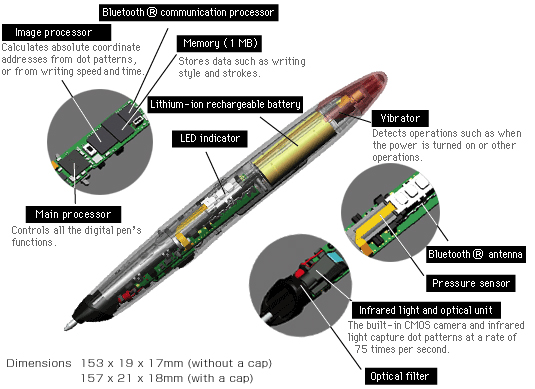