The paper makes this innovation so special. Printed on it is pattern consisting of millions of tiny dots, making it possible to identify the exact location of your pen, as well as connect a set of unique functions to the pattern.

The paper consists of an ordinary paper provided with a dot pattern, invisible to the eye, that is either pre-printed or printed on a laser printer.The displacement of the dots, 0.1 millimetres in size, from the relative position enable them to be programmed to tell the pen the exact location on the page – or the whole pad of papers – one is writing on.

By registering the pen’s movement across the paper, and also the pressure, the writing is interpreted and digitised. Hence the technology is not based on characters having to be written in a special way, in contrast to various other applications such as hand-held computers. Even drawn sketches can be interpreted and transferred.

Since the pen’s movements are stored as a series of map coordinates and the paper defines where on the paper one is writing, it is for example possible to go back and complete previous notes in a pad. The technology is capable of interpreting this correctly and putting it in the right context when transmitting it to the digital media.

The pattern enables different parts of the paper to be assigned different functions such as predefining various parts of a form.

Concurrently with the increasing importance of forms processing, handwriting recognition has become a supplementary technology of growing significance, which Anoto can use through partnering with numerous leading players in the field. Effective recognition and conversion of handwritten text to digital documents enables big savings for the users when forms enabling Anoto functionality are to be stored in enterprises’ computer systems. 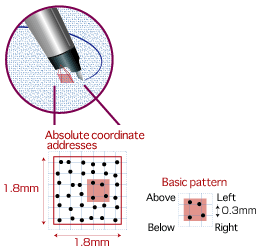 Anoto patterns are combinations of 36 (6 x 6) dots aligned to a grid (1.8 x 1.8mm) under precise calculation. The digital pen reads these dot patterns and identifies the locations of handwritten data.